Panerai’s Luminor Submersible is part of the brand’s long tradition of making diving instruments for military frogmen. In this feature from our September-October 2018 issue, we subjected this model, which debuted in 2017, to the ultimate test: ice diving. 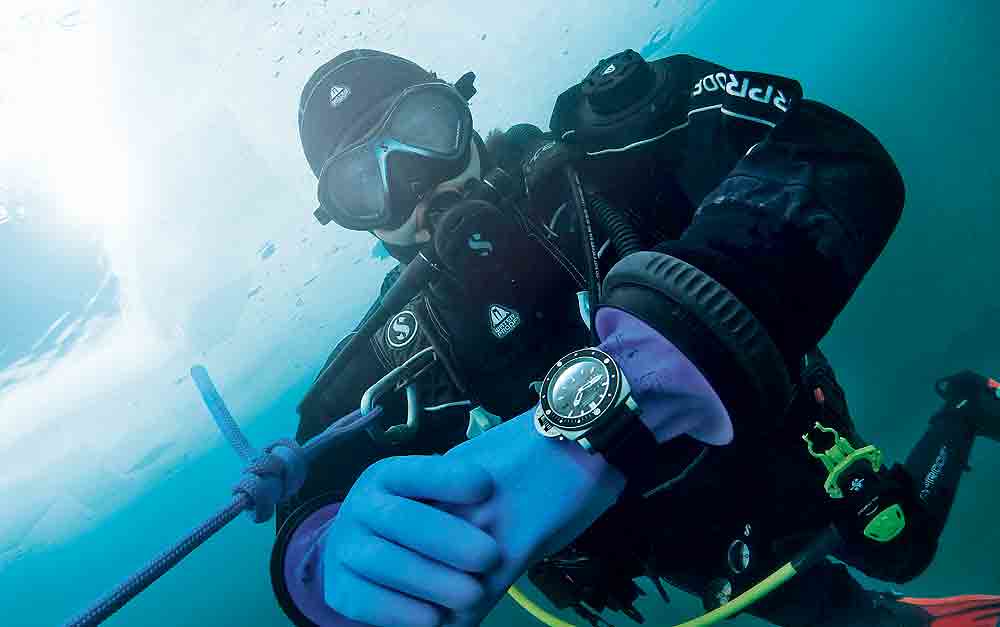 Ice diving requires special expertise. The risk of breaking through the ice on a frozen lake and drowning in frigid water is quite high if the layer of ice is not thick enough to hold the divers, their team and their heavy equipment. A diver must pass a training course and become certified in ice diving to learn how to minimize the risks involved. We plan to test the Panerai Luminor Submersible 1950 3 Days during our ice dive. Our dive won’t be nearly as dangerous as the missions of the military frogmen in the 1940s and 1950s for whom Panerai’s watches were originally developed. But we do have to drive up to Tyrol, Austria, high in the Alps, to find a lake covered by a sheet of ice that’s thick enough for our dive.

After we obtain permission for our dive, each diver clips himself onto a safety rope. Then we start our chainsaw and begin cutting small blocks of ice, which we push down and shove sideways so they disappear under the icy surface. It takes us only a few minutes to cut a square hole big enough for our two divers. The water temperature is a frosty +1 degree Celsius (33.8 degrees Fahrenheit). To protect themselves from the cold, ice divers wear so-called “dry suits.” Unlike ordinary neoprene suits, dry suits don’t allow water to make contact with the skin, are filled with pressurized air for insulation and can even be worn over warm undergarments. But dry suits are so thick that they make it difficult to wear a watch over their sleeves. In addition, the gloves are significantly thicker than neoprene ones and are usually connected to the suit’s cuff with a bayonet lock. 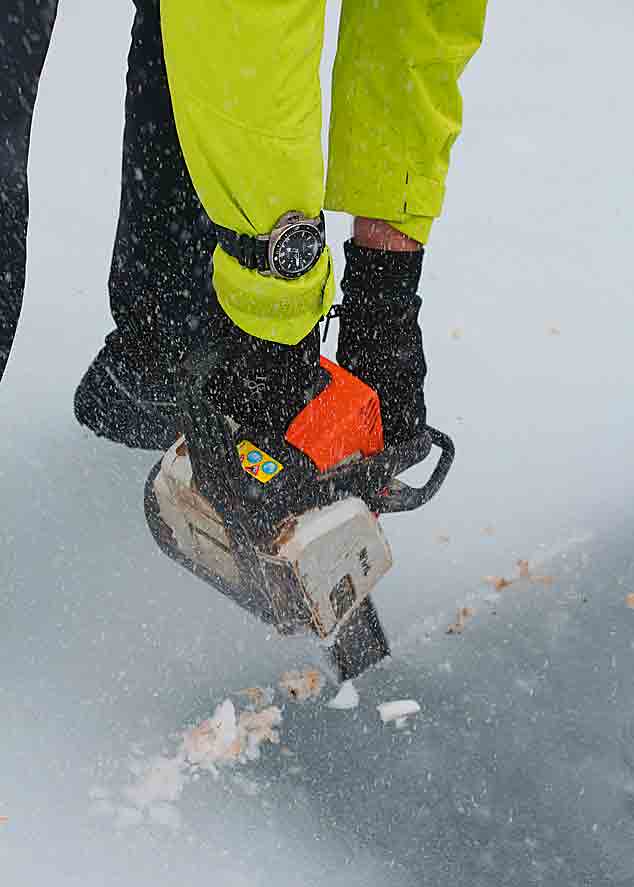 When we put the Luminor Submersible on over our thick gloves, its rubber strap is just long enough to allow us to slip the buckle’s pin through the last hole in the strap. However, the rubber strap on our Submersible is too big to wear the watch without a diving suit. The adjustable range isn’t great enough to accommodate both; more holes in the strap or a separate extension piece would have been very helpful. The eye-catching expansion coils near the strap lugs are very useful when diving: not only do they look professional, they also ensure that the watch stays snugly around the wrist underwater, when water pressure has compressed the diving suit. In extreme cases, as the pressure compresses the suit, a watch strap may become so loose that the watch can slip over a diver’s glove and plunge irretrievably into the depths.

Another danger in ice diving is that a diver may not be able to find the hole cut in the ice and can’t resurface if a problem occurs underwater because he’s trapped under an impenetrable ceiling of frozen water. That’s why ice divers never dive alone, always clip themselves to a safety rope, have a team of assistants topside on the ice, and tug on the rope to send signals if they encounter a problem during the dive. In an emergency, the assistants can simply pull on the ropes and haul the divers up through the hole in the ice.

Our divers sit on the edge of the ice and then heave themselves and their heavy equipment into the water. The Panerai Submersible must be able to cope not only with extreme temperatures, but also with a few hard knocks against the unyielding ice. Our test watch, which bears the somewhat lengthy model name “Luminor Submersible 1950 Amagnetic 3 Days Automatic Titanio,” has the characteristic case with the bridge-style crown guard that Panerai has used since the 1950s. There’s also a historical precedent for the watch’s rotatable bezel, which is not often seen on a Panerai. Most of Panerai’s watches made do without this detail, which would later be regarded as indispensable for divers. But Panerai delivered watches with rotatable bezels to the Egyptian Navy in 1956. With a diameter of 60 mm, this Egyptian version is considerably larger than our test watch, which is a wearable 47 mm in diameter. 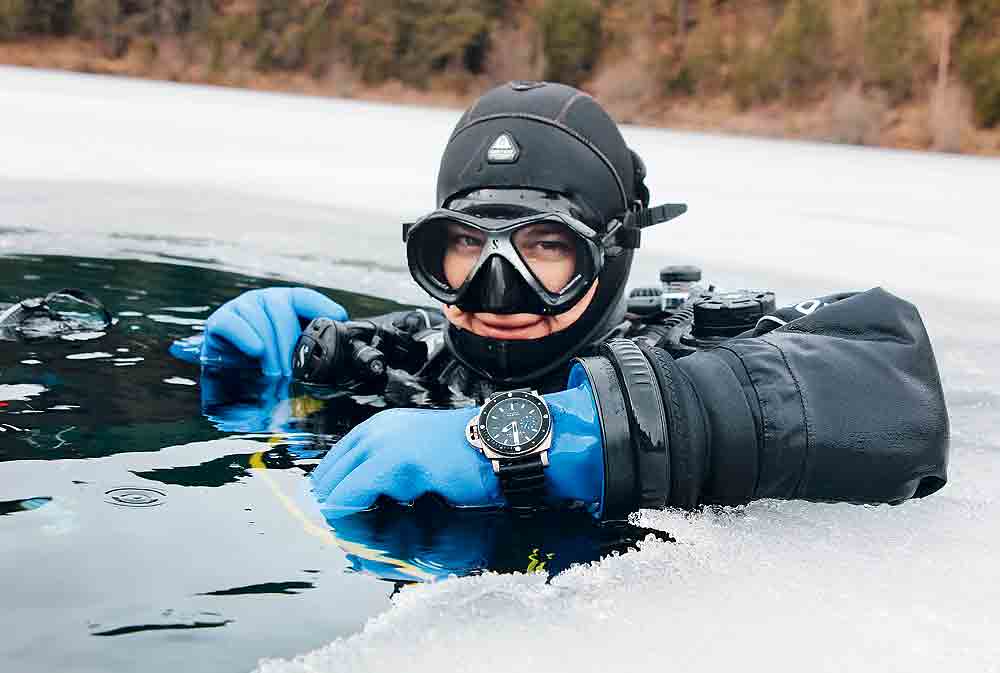 Before the divers disappear underwater, they turn the ring on the test watch until the luminous dot on the unidirectional rotating bezel is directly tangent to the tip of the minutes hand. This will enable them to read the diving time when they’re under the ice. The rotatable bezel snaps into position in single-minute increments, but a fair amount of force is needed to overcome its resistance. The fineness of the fluting around its rim adds to the difficulty of operating the bezel while wearing gloves. The design with small raised circles for the 5-minute indexes and large raised circles for the 15-minute indexes is derived from the 1956 Egyptian model. Like the rest of the case, the bezel is made of titanium, while matte black ceramic is used for the calibrated scale on the ring. There are also versions without ceramic scales: they more closely resemble the historical model, but we prefer the bold contrast on our test watch. In addition to the scratch-resistant ceramic scale, the fine fluting around the rim helps prevent scratches from marring this exposed part.

Legibility is a top priority when a dive watch is underwater. The Panerai Submersible isn’t quite as reflective below the water’s surface as it is above the water. And the time can be read quickly thanks to the ample quantity of luminous material. The minutes hand and the luminous index on the bezel shine with a blue glow, while the other luminous material glows green. This makes it even quicker to read the dive time: simply look for the blue and ignore the green. The seconds hand on its subdial is luminous, too, so it can be used underwater to check that the watch is still running. 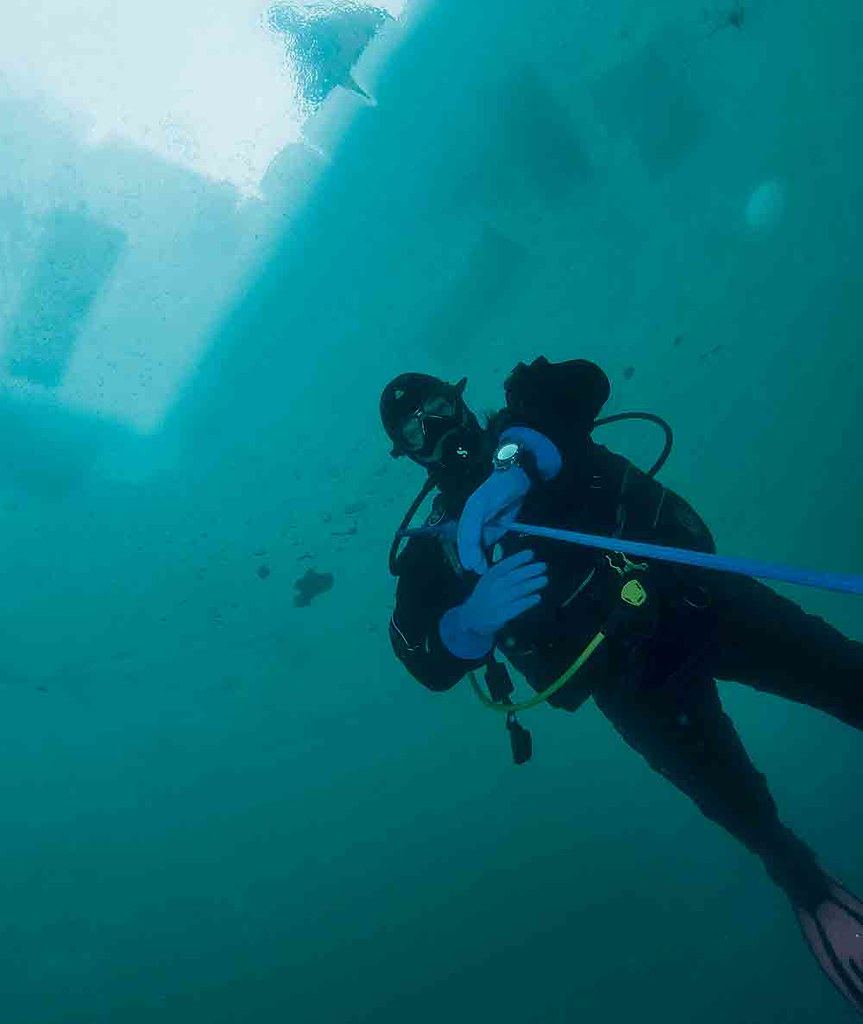 When a diver gazes upward from a certain depth, the layer of ice above him looks like a matte pane of glass and the hole cut in the ice resembles a window. Air bubbles rise and collect under the ice, where they merge into flat shapes that look like puddles – a fascinating spectacle. This is especially impressive in the winter, when the visibility underwater is better because there is less suspended matter and algae. We can’t confirm the pressure resistance of the Submersible to its full 300-meter depth during our dive because the lake is less than 40 meters deep and our safety ropes are only 10 meters long.

After completing three dives, we take a closer look at the Submersible. As expected, no scratches can be seen on the hard sapphire crystal or on the robust ceramic rotatable bezel, where scratches would surely not escape notice. The rest of the titanium case likewise appears unscathed, but scrutiny through a watchmaker’s loupe discovers a few small scratches on the satin-finished sides. The pin buckle suffered a somewhat worse fate in its exposed position: contact with our hard equipment has marred its finish, but these blemishes can be removed with a few minutes of polishing. That’s good news, because a replacement pin buckle costs $270. 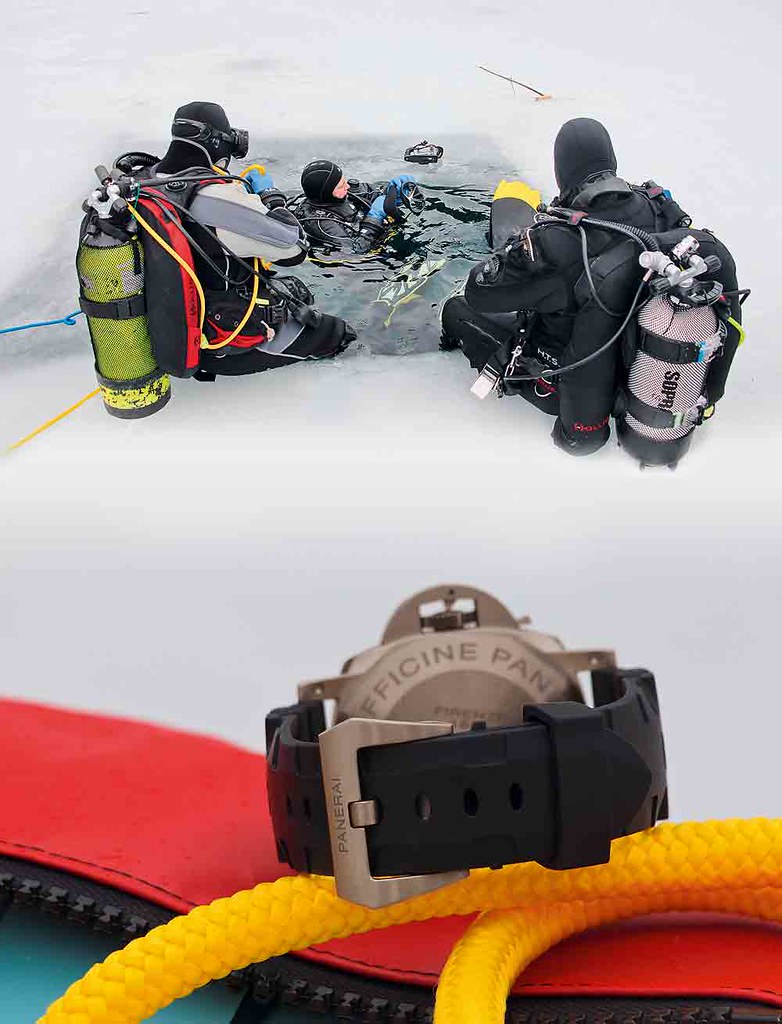 The hard knocks and extreme temperatures haven’t damaged the precision of the timekeeping. Our timing machine calculated an average deviation across all the positions of +1.3 seconds per day, which is nearly perfect. Only the greatest difference among the several positions (10 seconds) is a bit too large.
In conclusion, this Panerai Submersible passed its “acid test” under the ice. Of course, the watch’s owner won’t want to wear it only underwater, so other factors also come into play. A soft iron inner case prevents magnetic fields from penetrating into the Submersible’s movement – a worthwhile feature nowadays, when daily life involves so many potential sources of magnetism.

Our test watch is simple to operate, too, thanks to an easy-to-open crown guard, a stop-seconds function and the option of resetting the hour hand in full-hour increments, which is especially useful when daylight savings time requires you to “spring forward” an hour in the spring and “fall back” an hour in the fall. The downside is that adjusting the date display may take somewhat longer than it would if a full-fledged rapid-reset mechanism were included.

The movement inside the Submersible’s case is Caliber P.9010, a revised version of manufacture Caliber P.9000. With a height of just 6 mm, the P.9010 is nearly 2 mm slimmer than Caliber P.9000. This extra slimness gives our test watch a relatively low profile, despite its high resistance to pressure and its inner case for protection against magnetic fields. With three days of running autonomy, the Submersible will still be ticking on Monday morning after having been taken off and left unworn since Friday evening. This long-lasting power reserve is made possible by using two barrels in tandem with a bidirectionally winding (and clearly audible) rotor. The balance bridge, which is adjustable via knurled screws, promotes stability and precision. The freely oscillating balance with weight screws along its rim for fine adjustment ought to likewise improve the movement’s accuracy and fine regulation. As is usual in Panerai watches, the plate covers most of the movement, which boasts abraded stripes, polished heads on screws, and beveled and polished edges on flat parts. 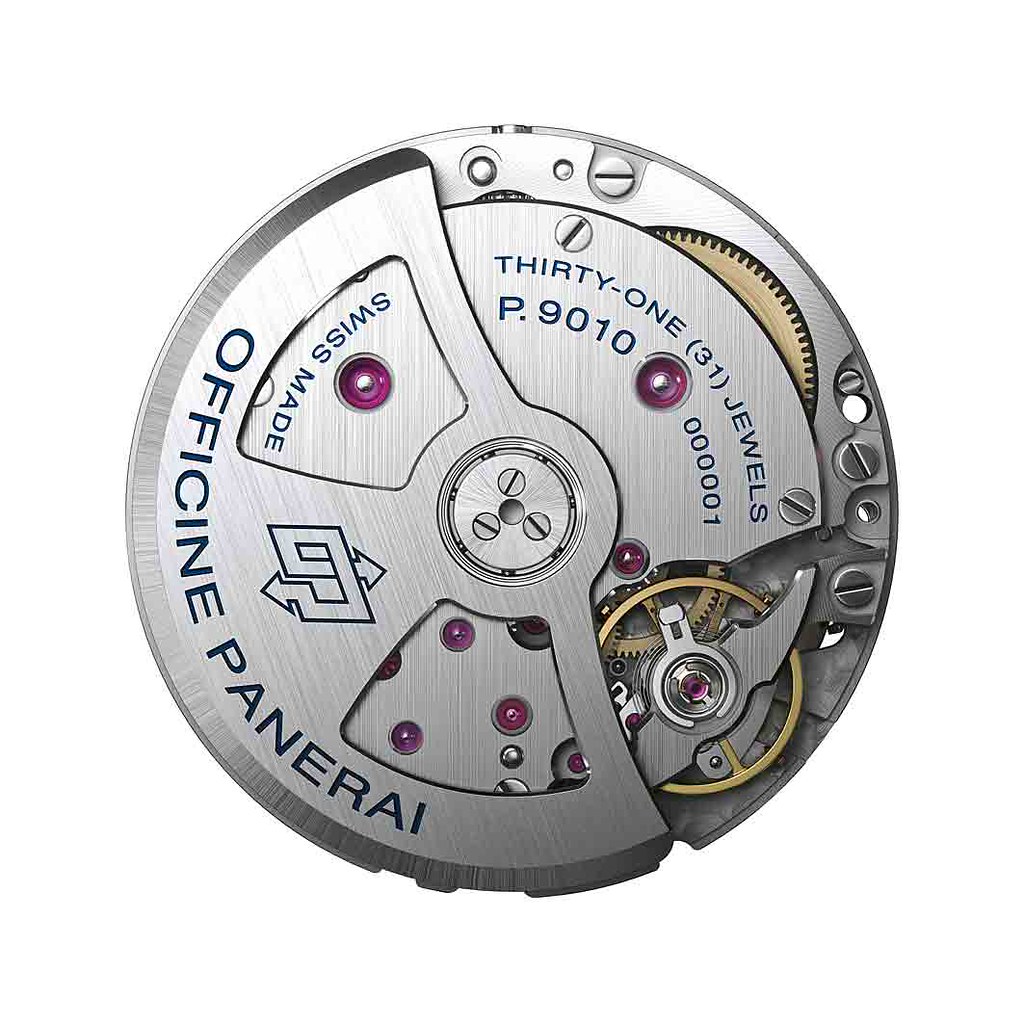 With a retail price of $11,000, this Panerai costs the proverbial “pretty penny,” but it offers plenty of value in return. The craftsmanship and processing are quite good, although some other Panerai models offer a better price-performance ratio. Compared to its competitors, the Submersible ranks in the upper third of the field and is nearly the price of the Rolex Sea-Dweller, which also provides almost three days of running autonomy thanks to its new movement. The Panerai Luminor Submersible is a watch for people who want to stand out from the crowd and sometimes even court danger, especially when the risks are manageable. 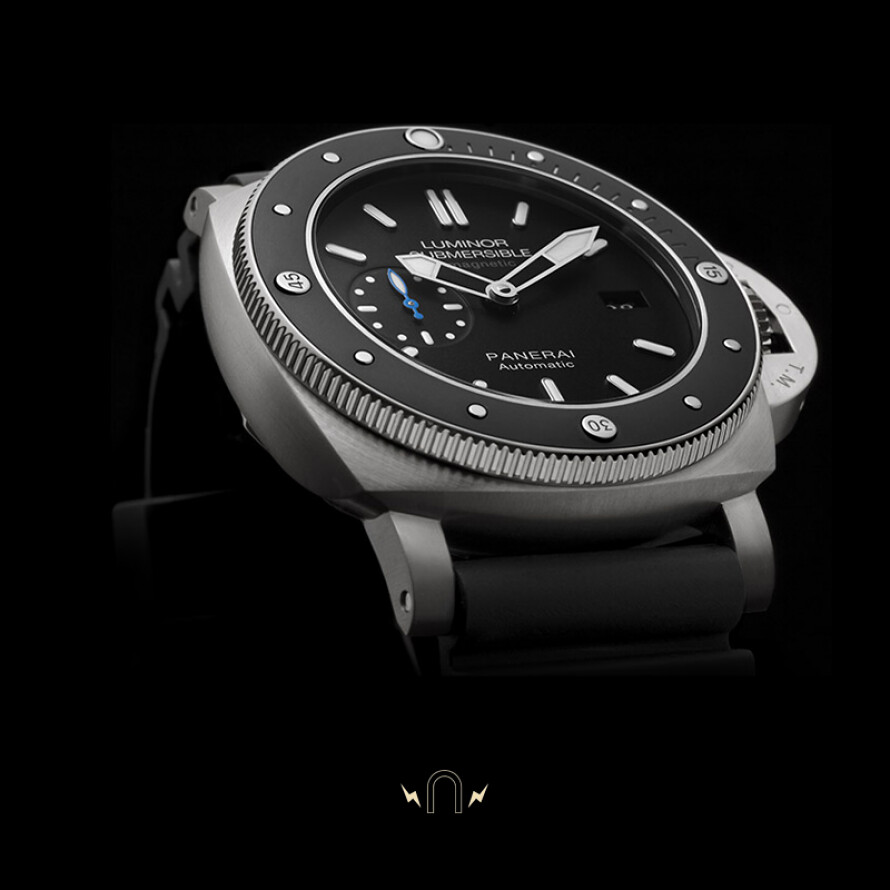 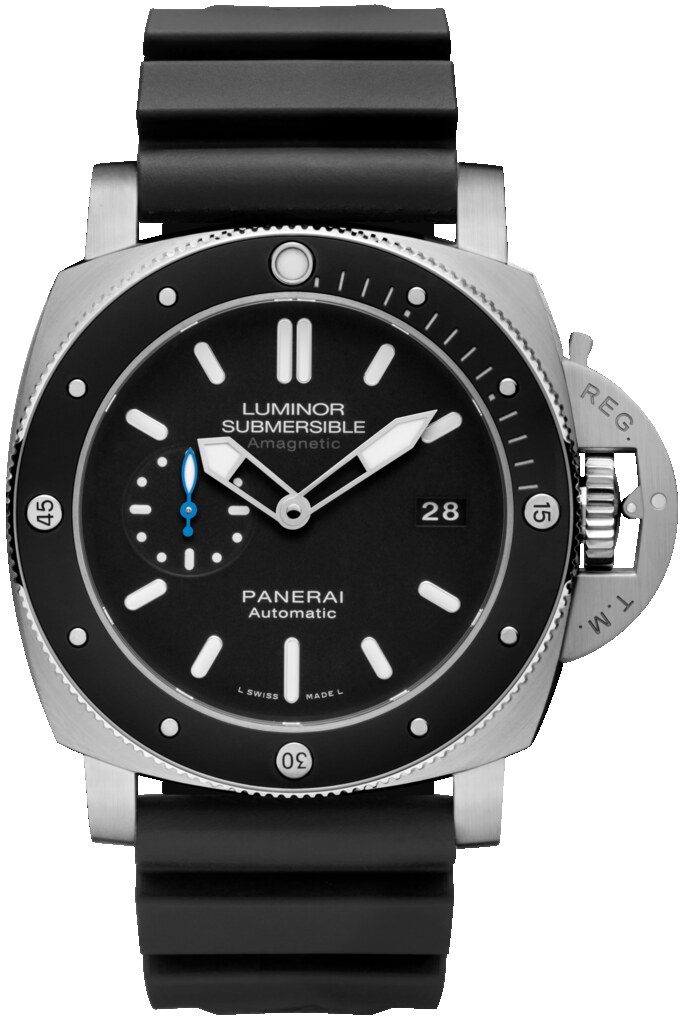